The London Diorama – A Remnant from the Birth of Photography 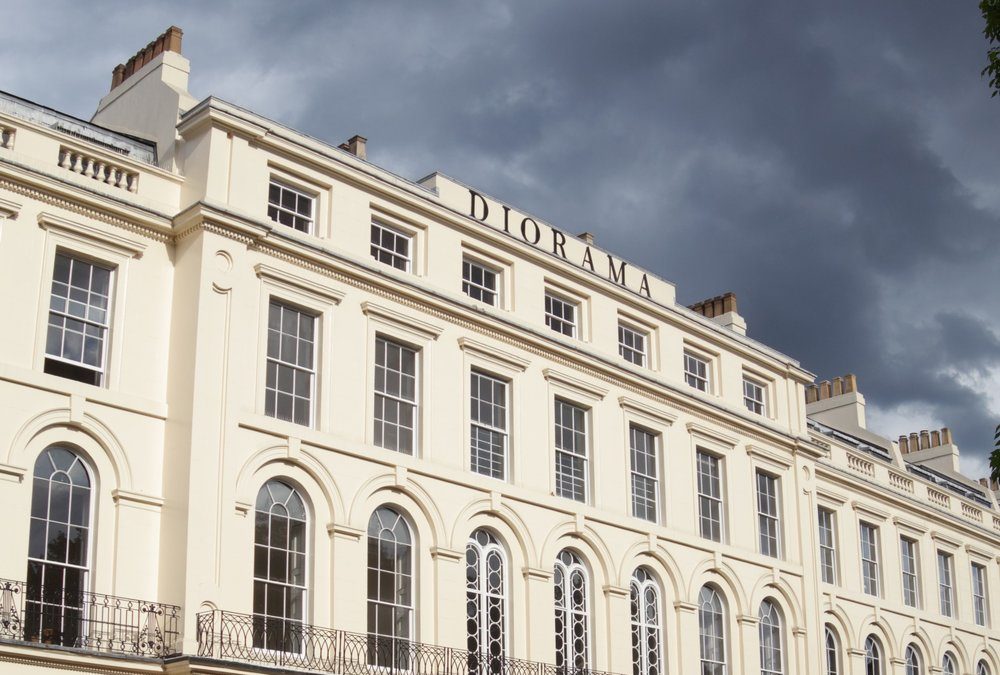 A view of the London Diorama, just at the foot of Regent’s Park.

There are probably more than a few in London who wonder why the word “Diorama” adorns the facade of this building, and are oblivious to its connection with photography’s origins. Sitting amongst other John Nash white stucco facades circling Regent’s Park, other than the word Diorama painted along the top, one would assume it to be just another office or mansion. But it is a unique structure that is directly connected with the birth of photography. Not built in a typical box configuration, but branching into a Y at the rear, it was the world’s second Diorama built by Jacques Louis Mandé Daguerre. You may recognize this name from the daguerreotype, one of the earliest photographic processes named after him. The enormous success of the diorama injected fervor Daguerre’s quest of finding a means of producing a perfect likeness of life.

In the years leading up the announcement of the invention of the daguerreotype process in 1839, (considered the birth of photography by many), Daguerre was entertaining the masses through the Diorama. Two Daguerre diorama’s existed, with imitators close behind. The first was built in Paris in 1822. So successful, another was built in London the following year (pictured). Daguerre coined the word diorama from a combination of Greek “di” – (through), and “orama” – (that which is seen). Today, the word diorama refers to a static dimensional display of objects arranged in front of a backdrop depicting a scene we are to believe them in. Natural history museums are incomplete without their dioramas of taxidermy and dinosaur fossils placed in front of a painted backdrop. A frozen display of the inanimate.

Daguerre’s diorama was more akin to theatre than museum. Audiences would be seated in a darkened room. The seating area was atop a large rotating platform which would pivot the audience from one performance to a second. Once audiences had settled, their eyes adjusted to the dark, a massive painting 7 meters tall would slowly come to life in front of them. Scrims, mirrors, and coloured glass would direct natural light from skylights and windows to selectively illuminate portions of the image, (decades before the invention of the lightbulb). Refractions through glass rods would cause water to shimmer. Painted gauze would add an illusion of depth to the image. Music, sound effects, and a voice telling a story of the painting would complete the environment. It was an immersive, nearly cinematic experience, half a century before the invention of motion picture. Audiences were enthralled. Art critics of the day hailed it as a transcendence of art; an improvement of painting. The added life brought to the picture pulled it closer to reality than mere paint on canvas.

It’s was no accident that the photographic image was Daguerre’s next target. He had conquered painting through this theatrical experience. The only way to improve on this and bring art closer to life, was to capture a true likeness of the world.

Daguerre was the uber dilettante – he had very little formal education. He was the furthest one could be from science, yet has been heralded as the discoverer of one of the most revolutionary inventions the world has seen. His primary education was during the bloody aftermath of the French Revolution, which saw a (sudden) shortage of teachers. His parents who noticed a natural proficiency in drawing, had him apprentice as an architectural draftsman when he was 14. At 17 he began an apprenticeship at the Opera in Paris as a scenic painter. His skills of drawing and painting at a large theatrical scale, lighting, and tricks of the theatre, combined with a showmanship and entrepreneurial savvy, led the way to long queues for Diorama.

Daguerre read scientific books, meddled with various experiments with lenses and the camera obscura, but was nowhere near discovering anything remotely close to capturing the photographic image. It was his introduction to a fellow experimenter located in southern France, Joseph Nicéphore Niépce by their common lens maker in Paris, which placed Daguerre on their right path. The lens maker recognized that both he and Niépce were working towards the same goal. He put Daguerre in touch with Niépce and they eventually became business partners with the goal of creating a repeatable, quality photographic process. Niépce was much closer to achieving this than Daguerre. He had already captured a permanent photographic image in the early 1820s using a process he called Heliography, (which is the oldest photograph in existence). But this process produced a crude image that required many hours of bright daylight to expose, and most eventually turned black. It required much refinement before it could be useful.

Daguerre was provided with this missing link, bringing him within reach of a solution. Niépce became ill and died from a stroke in 1833, never seeing the fruits of his labour. Daguerre continued to experiment with his newly expanded knowledge and eventually discovered a repeatable process that created an incredibly detailed image on a plate of silvered copper. This new process only required a 30-minute exposure. Daguerre announced the invention of the humbly named daguerreotype in 1839.

As Daguerre got closer to achieving the daguerreotype, he lost interest in the Diorama. It was becoming more expensive to run, less popular, and difficult to make money from. In 1839, while he was showing a couple of daguerreotype plates to Samuel Morse (of the Mose code), a lamp inside the Paris Diorama tipped over starting a fire, and the building burnt to the ground. Daguerre did not rebuild and continued focusing his energies entirely on promoting and refining the daguerreotype. The London Diorama continued for a few more years, largely reusing paintings already in London and those salvaged in Paris. It closed in 1851, the building was sold and reopened as a Baptist Church.

Remarkably, the building is still there, complete with the original “Diorama” inscription along the top of the facade. From my understanding it is a listed (protected) building, so shouldn’t be disappearing anytime soon. Remarkably, I’ve just discovered that the building is currently vacant and for sale! If there was ever a location in the world appropriate for a museum dedicated to photography, this would be it. There are few locations in the world directly linked with the birth of photography, let alone in the middle of central London, (and available!). This would the ideal location for a museum that tells the story of the birth of photography. Britain desperately needs a national museum of photography. Perhaps this building could be part of one?

If one could travel in time, a stop in 1830’s Paris or London would be at the top of my list for a sitting at the Diorama.

The Diorama sits on Park Square E, at the eastern bottom edge of Regent’s Park. There’s not much more to see than the facade. Though it is possible to take a peek at the rear of the building and see the unusual configuration for the two performance galleries through Albany Terrace, running off Marleybone Rd.

Portland Street and Regent’s Park tube stations will get you within a 5 minute walk of the Diorama. It’s also not far from Baker Street and Madame Tussauds, about a 10 minute walk away.

Much of my knowledge about the Diorama and Daguerre is from Helmut and Alison Gernsheim’s wonderfully informative book, “L.J.M Daguerre, The History of the Diorama and the Daguerreotype”. Dover Publications, New York, second edition, 1968.

Strangely, this publication appears to have been out of print since this pressing nearly 50 years ago. The book could have been called “Daguerre Demystified”, as it fills in all of the gaps left when reading general histories of photography. I couldn’t recommend it more.

This website has interesting information on British Dioramas including illustrations

A view of the London Diorama, just at the foot of Regent’s Park.